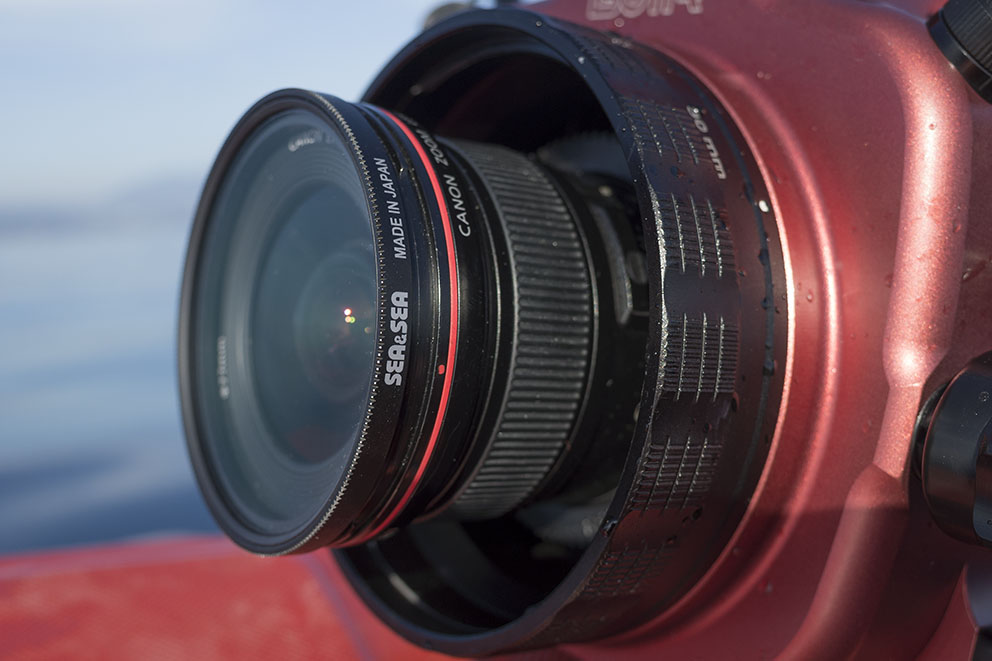 Rectilinear wide-angle lenses are one of the biggest nightmares for full-frame UW photographers. The main reason is the lack of image corner sharpness when using these lenses behind a dome port (it also happens with other sensor sizes but in a minor grade). When I am talking about wide-angle lenses I refer about lenses ranging from 14 to 24mm, and the wider the lens the more evident are corner aberrations. Underwater photographers, we tend to use the wider lens that we can, in order to be as close as possible to the subject and get a better contrast and sharpness, so this aberration problem is mostly significant when using lenses between 14mm(1) and 20mm. So at the end the problem happens mostly when we use lenses like 16-35mm, 17-35mm or 17-40mm, 18-35mm(2)  and 20mm. Since now, the main solution was to mount big domes and use small apertures. Nowadays, with digital cameras offering an amazing amount of detail, if we want to have decent corner sharpness we should use domes around 9” in diameter (of course with the right extension ring attached between the dome and the housing, and the extension length depends also on how long is the lens and where nodal point is!!) and f/stops over f/11 (You can find some articles and image samples on the net about that)

Of course, this question also depends on what you are shooting. For example if you photographing blue water animals where there is nothing but water in the corner of the image you can shoot at f/8 without being worried about corner aberrations. But if you shoot a reef scene the aberration will be quite noticeable if you not use f/11 or over.

These limitations are not negligible: shooting at f/11, or over, most of the time forces you to use high ISO. Nowadays digital cameras offer an excellent quality at high ISOs, and for sure it will improve, but in some cases it still means you’ll loose some quality because of the image noise. Other constrain is the use of a big dome. Today 230mm(9”) and 254 (10”) are the biggest domes available(3) and theses are really big and heavy pieces of gear, which could be an issue for travel photographers.

Solutions on the way

To solve this problem the better solution would be to use a wet corrector lens but this is not easy to get right now. There is some old wet corrector lens out there (thanks to Dr Alex Mustard who revealed this to all of us!), it was originally made by Zeiss for medium format cameras, like Hasselblad, and has been adapted to be used with modern dSLR and wide-angle lenses (you can learn more about that here: http://wetpixel.com/forums/index.php?showtopic=54681)

Some manufacturers have recently presented some possible solutions, but we must know that those solutions are, in my opinion, only half measures. One solution, presented by Nauticam, has created a wet lens that transforms a 28mm into an ultra-wide angle lens with around 130º. It seems to even work well with full-frame cameras like Sony A7 series. We must know that this lens transform the image into a sort of semi-fisheye lens with spherical distortion, so the image would not be rectilinear when lens attached.

Another way to correct the corner aberration, used mostly in the past, was to attach diopter filter in front of the lens. The more used filters were 2x, 3x or 4x, and the strength of the filter was directly related to the diameter of the dome used(4). The downsides of this method were: a reduction of the field of view, and a pincushion distortion created on the image. Both effects become stronger depending on the strength of the lens diopter, so a 4X lens creates a bigger pincushion distortion and reduces more the FOV than a 2X filter. In my opinion the image is more pleasant when there is no dioptre filter attached.

The Japanese manufacturer Sea&Sea has just released, IMHO, the more interesting solution available to date. They have created a filter that corrects the corner aberration without any other substantial effect in other parts of the image. The filter promises 2 f/stops improvement over images taken without it. The best quality is still obtained using a big dome… the bigger the best!!

I have been doing some test in a pool, and in the wild, with different domes sizes (200mm, 210mm and 230mm diameter). I have obtained the best quality with the 230mm dome with right extension (size depending on the lens). I have tried different lenses like the Canon 17-40mm f4 and the Canon 16-35mm f4 IS. The last one is a modern lens designed for high-resolution digital sensors and offers better corner sharpness on land when compared with the 17-40mm. As expected I have obtained better corner results with the Canon 16-35mm f4 IS.

– The Sea&sea Internal Correction Lens offers a substantial quality improvement on corner of the image.

– In some cases the improvement is almost the claimed 2 f/stops.

– The lens corrects also the barrel distortion and turns it into a very light pincushion distortion.

– The improvement is more significant when using modern lenses that also offer better quality in the image corners when used on land.

– To my taste at f/8 the corner quality is quite good and very good at f/11. At f/5,6 the quality is good enough for blue water subjects. (Note: the focus point has always been de “C” in the image centre)

The lens is not cheap (around 350€) but, in my opinion, is a good investment if you want to improve the quality of your images, mostly if you consider that the total amount you have spent on your photo gear. The lens is available in two diameters: 77mm and 82mm

You can get me more info at: http://www.seaandsea.jp/products/digital_slr/accessory/lenses/

(1) I will discard 14mm lenses (or wider like Canon 11-24mm, recently released!) because their front glass is spherical and it is not possible to screw a normal filter

(2) Zooms used at the wider side

(3) There are some bigger ones that start to appear but only for special purposes like split shots! 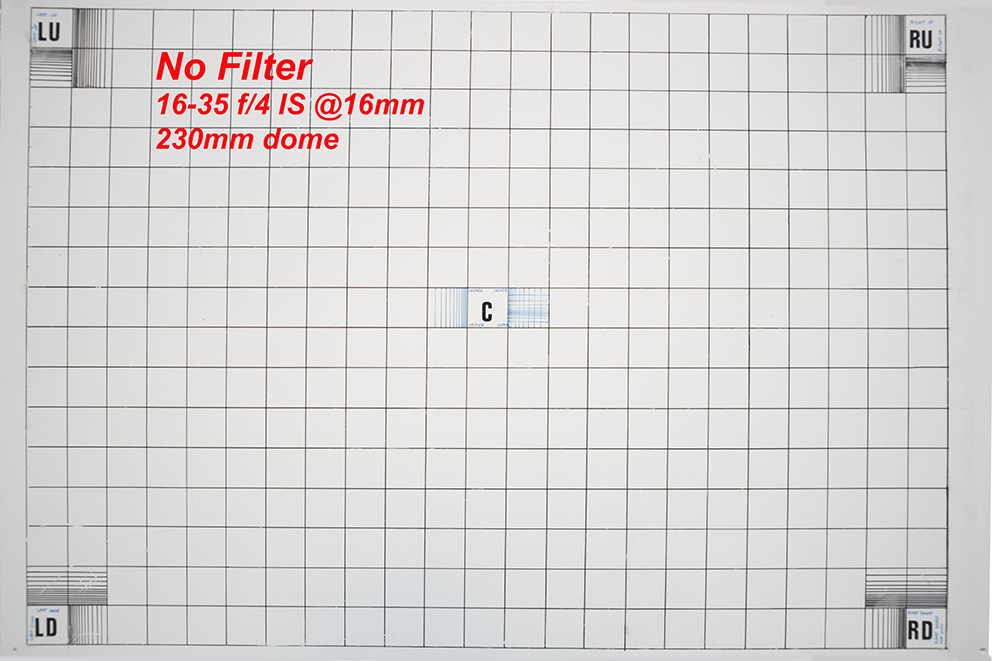 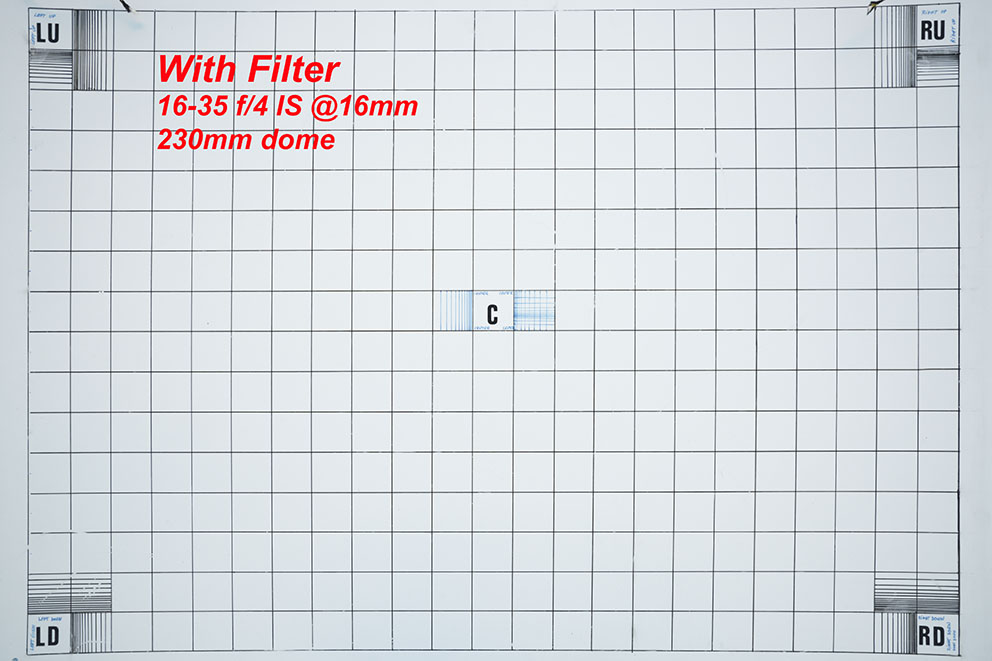 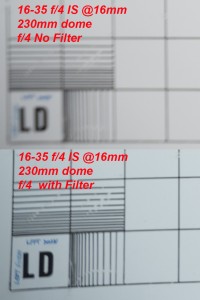 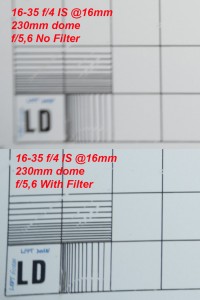 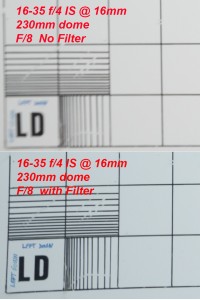 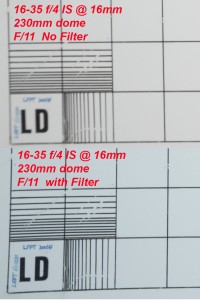 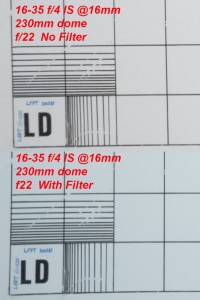 I have received requests to add filter test images with smaller domes. For now I add some pictures with a 200mm dome. In short I will try to post some test with a 170mm dome. Images were taken with the Canon 17-40mm which offers less corner sharpness than the 16-35 f4 IS (which I borrowed for the first test). This lack of sharpness, along with the use of smaller dome, may be the reasons of more evident aberrations than with 16-35 f4 IS. I attach only f/8 and f/11 results, f/stops where improvement starts to be obvious. 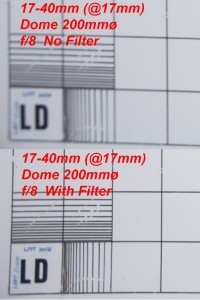